Afghanistan Crisis LIVE Updates: S Jaishankar says India will evacuate as many as possible, Taliban didn’t stand by their word

Reports Of Death “False”, Was “Beaten By Taliban”: Afghan Reporter

Thailand: MP challenges PM to do two hands in martial arts, says – 3 demands will have to be fulfilled if you lose

Entire Pakistan at Taliban’s Service’: Amrullah Saleh on Why US Attempt to ‘Buy’ Cooperation Came to Naught

UP: Yogi’s gift to 28 lakh employees and pensioners, approved to give dearness allowance with increased rate

Social menu is not set. You need to create menu and assign it to Social Menu on Menu Settings.

As record heat waves hit western North America and deadly floods swept Germany, the growing risks associated with climate change have grabbed headlines, and prompted widespread discussions in the West.Scientists have been warning for years that the climate crisis would amplify extreme weather, making it deadlier and more frequent — and the latest catastrophes are seen as a timely reminder the threat could hit much closer to home than some might think.But this week, with much of China’s central Henan province devastated by record rains, there was little reference to the broader climate crisis among Chinese officials, scientists or state media.

The silence is all the more conspicuous given how much Chinese authorities have emphasized the extremeness and rarity of the weather. At one point, the provincial capital of Zhengzhou was pelted by nearly 8 inches (20 centimeters) of rain in an hour. In just three days, it had 24 inches (61 centimeters) — or nearly a year’s worth — of rainfall, according to the Zhengzhou meteorological station.

Zhengzhou’s weather station called it a “once in a thousand years” downpour. Henan’s water resources department went a step further, claiming rain levels recorded at some stations could only be seen “once every 5,000 years.” 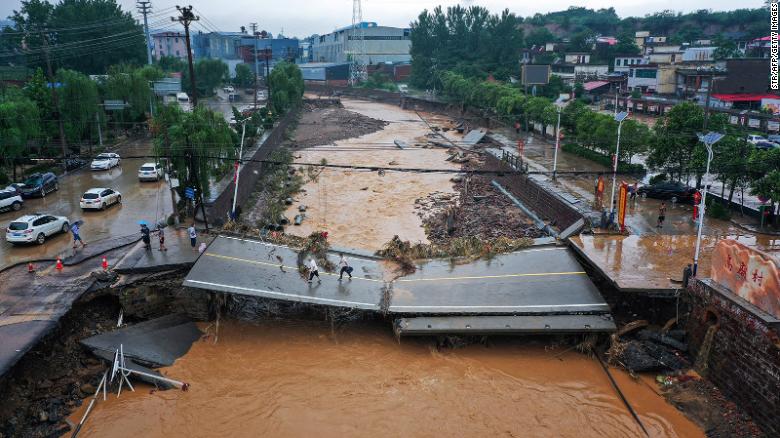 A damaged bridge following heavy rains which caused severe flooding in Gongyi in China’s central Henan province on July 21, 2021But on Thursday, state-run newspaper the Global Times said Ren Guoyu, a chief expert at China’s National Climate Center, “dismissed the connection between heavy rain in Zhengzhou and global climate change.” Instead, he attributed the flooding to “abnormal planetary scale atmospheric circulation,” the report said.Liu Junyan, climate and energy project leader for Greenpeace East Asia, said without the impact of climate change, “it is very difficult to imagine such extreme rainfall would occur in an inland city like Zhengzhou.”But she said it is rare for Chinese weather and climate authorities to acknowledge a potential climate change connection in the aftermath of extreme occurrences, because such analysis requires more research and data. “Out of caution, they basically avoid talking about it,” she said. Such associations are also seldom reported by state media, she added.That stands in stark contrast to how climate scientists and the media have responded in the West. While full analysis is needed to confirm to what degree changes to the earth’s climate have affected specific extreme weather events, many experts agree the trend is clear.Scientists at the United Nations’ World Meteorological Organization (WMO), for example, conducted a rapid attribution analysis, which found the western North America heat waves would have been “virtually impossible”

without climate change. WMO Secretary General Petteri Taalas later said they were “clearly linked” to global warming.It is not that Chinese leaders do not admit climate change is real. On the contrary, President Xi Jinping wants China, the world’s largest emitter of greenhouse gases, to become a global leader on the climate crisis. Last year, he pledged to hit domestic peak emissions before 2030 and achieve carbon neutrality by 2060, earning international praise.In the official narrative, climate change is often presented as a global crisis that China, a “responsible major power,” has stepped up to solve, especially as the former Trump administration rolled back US involvement. Less mentioned, however, are the direct threats it poses to China, and its effect on the daily lives of its 1.4 billion people.Chinese authorities are also wary that climate activism popular among young people in the West could spread to China. Last September, 17-year-old Ou Hongyi, known as the Greta Thunberg of China, was detained and questioned for hours by police when she joined the Global Climate Strike in Shanghai, an international event that attracted thousands of protesters at more than 3,500 locations worldwide.That has made it difficult for the Chinese public to realize how they are personally related to the climate crisis, Liu said. Like some in the West, Chinese people tend to perceive the dangers of climate change as something remote — threatening only the melting ice caps in the Arctic or low-lying islands in the tropics. And although emission cuts and green reforms are often mentioned in state media and classrooms, many treat them as just another state policy for local governments to follow.”For many, climate change is more of an issue about politics, about economic gains and costs, and international collaboration,” Liu said.

On Chinese social media, too, some have started to reflect on the lack of discussions on the issue. On Weibo, China’s heavily censored version of Twitter, one user said she was disappointed to find “very, very few discussions” about climate change on major social media platforms.”In Henan, the (disaster) unfolded too quickly in such a short time,” she wrote. “But in other places, it’s like boiling a frog in warm water — it might not cause any immediate life threatening danger, but in the long run, I reckon it’ll also affect how we live and work.”

Salman Khan shows his staff the film ‘Antim: The Final Truth’ before its release, this is the reason!

All countries should assist people of Afghanistan to start a new chapter of their lives: Taliban spokesperson Suhail Shaheen

Students wandering to get their marksheets corrected

Afghanistan Crisis LIVE Updates: S Jaishankar says India will evacuate as many as possible, Taliban didn’t stand by their word

Social menu is not set. You need to create menu and assign it to Social Menu on Menu Settings.

admin
On 6 years Ago

Now WFH will be expensive! There may be a cut in the salary of Google employees

Big success for security forces in Jammu and Kashmir, one terrorist killed in Kulgam encounter

Viral News: Lottery of person opened, Bar will give compensation of Rs 40 crore for this mistake